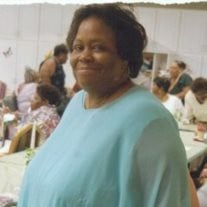 Barbara Ann King was born on October 3, 1950 in Cincinnati, Ohio to Anna Peal and Robert Jackson. The Lord called her home on March 7, 2014. Barbara, one of seven children, grew up in Cincinnati and attended College Hill Elementary and the former Quarter Tech High School. Barbara worked as a cook in the kitchens of local schools and volunteered her services at church kitchens throughout the community. She married David Albert King, who she met as a teenager, in the early 1980s. The King’s enjoyed more than 25 years of matrimony before he preceded her in death in 2004. Their union was blessed with Kimberly, David, Roshawn, Delphonso, James King and Irene. Barbara was a life-long volunteer who dedicated herself to help feed the homeless. She also opened her doors to house children, grandchildren and anyone who needed her loving care. It was no coincidence that Barbara always had a house full of people. She loved to crochet and work crossword puzzles, read her bible and to shop (Thrift stores.) She was outgoing, adventurous and did not hesitate to offer her opinion. Many people felt connected to her because of her sweet nature. Barbara was surrounded by friends throughout her life. She participated in Senior Link, where she enjoyed attending until she became ill. She was preceded in death by her parents Ann and Robert Jackson; husband, David Albert King; siblings, Melvin Jackson, Azell Jackson, Pearly Jackson andRobert Jackson. Her memory will always be treasured by her children, Kimberly (John) Baggett, David Jackson, Roshawn Jackson, Delphonso Jackson, Irene Jackson (Tyrone) Thomas and James King; siblings, Gloria Jackson, Lutreia Baggett, Debbie Jackson Roberson; three step-children, Devilynn Harden, David Albert and Tina Albert and 36 grandchildren . Barbara will soon have a great-grandchild who will undoubtedly hear many stories about Barbara Ann King.

Barbara Ann King was born on October 3, 1950 in Cincinnati, Ohio to Anna Peal and Robert Jackson. The Lord called her home on March 7, 2014. Barbara, one of seven children, grew up in Cincinnati and attended College Hill Elementary and the... View Obituary & Service Information

The family of Barbara Ann Jackson-King created this Life Tributes page to make it easy to share your memories.

Send flowers to the Jackson-King family.