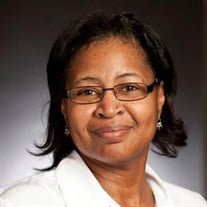 Celebrating the Amazing Spirit of Anita Lynn Brentley Anita was born on June 22, 1960 in Middletown, Ohio to Ebie and Johnsie Banks. She completed her life's journey on January 25, 2020, peacefully surrendering into the arms of The Lord. She grew up in Middletown, Ohio, where she graduated from Middletown High School. Anita received her degree in Elementary Education from Hampton Institute (University). She married Thurmond Brentley on June 11, 1988 in Middletown Ohio at Second Baptist Church and their union was blessed with two sons, Cedric and Brian Brentley. Anita was passionate about education and the health and safety of children. After graduating from Hampton Institute, she obtained her Masters of Education from Miami University, along with a second Masters from Tulane University. She recently obtained her Doctor of Philosophy in Public Health from Walden University in 2019. She used her extensive education to give back to the community she so loved. She began her service at Cincinnati Children’s 20 years ago.  Anita participated in training for Every Child Succeeds on Home Safety and was the project lead for the “Assuring Smoke-free Homes” project.  As she advanced her work with Every Child Succeeds, she partnered with Avondale families, volunteers, and clergy to build a supportive community through family groups and a family pantry.  She spent a great deal of her childhood in Avondale and was engaged in the Avondale community for decades.  Anita understood the importance of family and community.  Cradle Cincinnati remembers Anita as a true champion of Hamilton County families. As a Community Engagement Specialist in the Anderson Center, she was an advocate for patients, families and community. She cared deeply about others within Cincinnati Children’s and beyond. She led the team to new ways of communication and connection with families.  Her Community Engagement colleagues, and all who knew her, will always be inspired by her compassion, bravery, insight and toughness. Anita received numerous awards, some of which included: The Cincinnati Herald Nefertiti Award, National Speaking of Women’s Health Community Investment Award, Martin Luther King Special Recognition Award, The Imperial Court Daughters of Isis Hall of Fame Outstanding American Woman, Urban League of Greater Cincinnati African American Leadership Development Program Award of Achievement and a Certificate of Appreciation for Every Child Succeeds/Avondale Program/MOM’s Group. She was also a dedicated participant of St. Andrew’s Episcopal Church and Carmel Presbyterian choirs. Anita was an active member with Cincinnati Chums Inc along with being a member of Alpha Kappa Alpha Sorority Inc. Anita was preceded in death by her parents, Ebie and Johnsie Banks; one brother Ebie Banks, Jr. Anita now leaves to cherish her memory her husband,Thurmond Brentley and her two sons, Cedric and Brian Brentley; Brother in law Trevor Brentley, Mother and Father in law David (Karen) Brentley, sisters Karen (Bill) Gaines, Constance (Bill) Banks Simon, Anna (Quentin) Banks Simeon, Ninetta Banks (Ken) Jordan; brothers Ronald (Joyce) Banks, Wesley (Carmen) Banks and many nieces and nephews. She will also be truly missed by a host of other relatives, friends and co-workers who will never forget her sunny disposition, loyalty and love.

Celebrating the Amazing Spirit of Anita Lynn Brentley Anita was born on June 22, 1960 in Middletown, Ohio to Ebie and Johnsie Banks. She completed her life's journey on January 25, 2020, peacefully surrendering into the arms of The... View Obituary & Service Information

The family of Mrs. Anita Lynn Brentley created this Life Tributes page to make it easy to share your memories.

Send flowers to the Brentley family.